A little research will also tell you why that union is blessed, and why an improper union is not blessed.

The Bible tells us that a proper union between a man and a woman is blessed by God.

In a Bible study the other day, a friend of mine asked if the Bible actually stipulates that a marriage should be between one man and one woman. Well, the answer had to be, "I don't know, but I think so." Oh, there are verses that say if you want to be an elder or deacon, you can only have one wife (1 Timothy 3:2
2Therefore an overseer must be above reproach, the husband of one wife, sober-minded, self-controlled, respectable, hospitable, able to teach, (ESV)

, 1 Timothy 3:12
12Deacons must be husbands of only one wife, and good managers of their children and their own households. (NAS)

, Titus 1:6
6An elder must be blameless, the husband of one wife, having children who are believers and are not open to accusation of indiscretion or insubordination. (Berean Study Bible)

, and Deuteronomy 17:17
17He must not take many wives, or his heart will be led astray. He must not accumulate large amounts of silver and gold.

), but there are also verses that say something else entirely (Genesis 4:19
19Lamech married two women, one named Adah and the other Zillah.

, Exodus 21:10
10If he marries another woman, he must not deprive the first one of her food, clothing and marital rights.

, 1 Samuel 1:1-2
1There was a certain man from Ramathaim, a Zuphite from the hill country of Ephraim, whose name was Elkanah son of Jeroham, the son of Elihu, the son of Tohu, the son of Zuph, an Ephraimite. 2He had two wives; one was called Hannah and the other Peninnah. Peninnah had children, but Hannah had none.

). However, this second set of verses doesn't specify that these men are deacons or elders. So, what are we to think?

Well, the instructions from God say that a man should not take many wives. However, when you see that a man took more than one wife, there were rules about the way he should treat them. While we Christians know that it is really unusual (chortle, cough) for people to disobey the rules, but sometimes they do. But, is it clear either way? From reading the English versions and translations available to Christians, there is no clear determination that we can lock onto. Unless, that is, if you want to be an officer in the church.

Only for church officers?

However, there is at least one site that describes something that I'm sure the average Christian does not know. The Hebrew concept and words for man and woman, when joined together, become one of the terms for the name of God. One site I found at Hebrew Word Study describes this, and there is another site that independently confirms a conclusion on what the first site says (Excape All These Things). While I haven't yet completely researched these claims, a review of the language involved confirms enough for this page. Feel free to read the pages directly, or read on here for a quick summary.

Remember the situation with Adam and Eve? Their union was blessed by God and the reason was specified in Genesis 2:24
Therefore shall a man leave his father and his mother, and shall cleave unto his wife: and they shall be one flesh. (KJV)

. Now, here is the part that is generally unknown by the average Christian. According to the article Stuck In The Middle With You at Hebrew Word Study he paraphrases the words of a Rabbi Akiba:

He points out that the Hebrew word for man, ish and the Hebrew word for woman, ishah, contain two particularly important pictures. These two words have two common letters and two unique letters between them. The unique letters are the Yod and the Hey. The Yod is found in the word ish (Aleph-Yod-Shin). The Hey is found in the word ishah (Aleph-Shin-Hey). When we combine these two letters, we get Yod-Hey which is an abbreviation of God's holy name. That's right. Stuck in the middle of the two words for man and women, when they are combined, is God's name. Rabbi Akiba says, "When husband and wife are worthy, the Dwelling Presence of God abides with them."

The word "pictures" in the paragraph above refers to the "pictographs" of the original language. For example, the Hebrew aleph, the first "letter" of the Hebrew alphabet, started out as a "picture of an ox, then progressed to what it is today (from Ancient Hebrew Research Center): 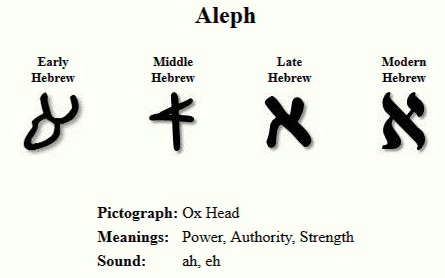 Now, much like you, I thought that this was just another statment trying to draw attention to someone's idea. So, the next step was to look up the names of God and there was another site totally independent of that one and here is what I found: 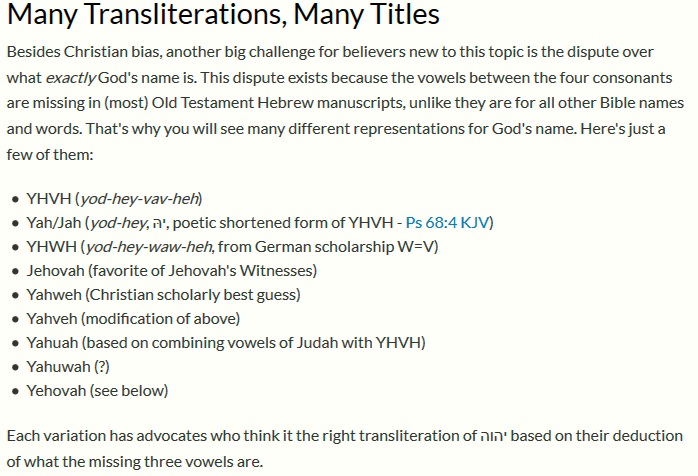 If you notice the second dot down in the list, you see the term "yod-hey" used in Psalm 68:4. Then I went to the Interlinear for Psalm 68:4 to see for myself, and found this:

What I saw there is JAH instead. Still skeptical, I looked up "yod-hey" and found this at Bible Land Studies:

There are Scriptures that translate the "yod" and "hey" as Yah, meaning Yahveh. However, sadly they do not often get translated that way in English. The NKJV in Ps. 68:4, Isa. 12:2, 26:4 and 38:11 do translate the Hebrew correctly.

As you can see in the Interlinear, the word be-yah was rendered JAH in English, closing the loop for the study. The yod and hey combine in the joining of man and woman to form the name of God, as stated by the Rabbi from the first site.

While this finding can be seen as conjecture and may also be translated by some as something else entirely when taken out of context with the rest of Scripture, it seems to jive with the fact that the writers of the "New Testament" felt that only one wife was a condition that meant a man was close enough to God to hold an office in the church community. While looking at the semantics and implications of the union of a man and wife, combining that with the word of God, I can see that "God is with us" in more ways than just one when we get married the right way and stay that way. Also, remember that His name is Yahweh, not Yahwehwehweh, as would be implied by one man with three wives.

It is also neither Yahyah or wehweh, for those churches with "married" gay pastors.

This also makes more sense when you consider the admonition of Paul in our opening statement about 2 Corithians 6:14
Do not be yoked together with unbelievers. For what do righteousness and wickedness have in common? Or what fellowship can light have with darkness?

. A man and a woman, the only acceptable marriage, without God in common cannot form a blessed union in marriage.