If the definition of honesty includes the presence of truth, how can pastors of different denominations be honest with their congregations if they all have opposing views on some issues? Jesus only had one church - the one that acts and believes as He taught them. So if there is only one, which church (if any of today even are) is the honest one?

As an adverb: used to persuade someone of the truth of something.

Let's start with a definition: 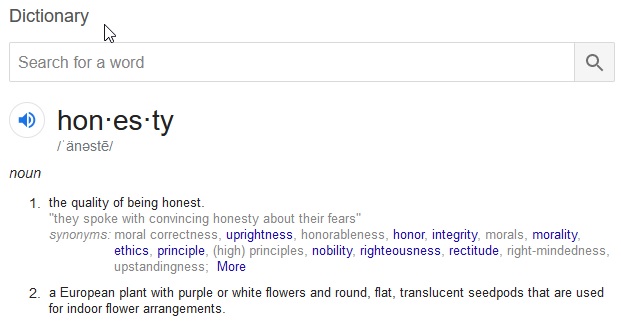 Well, looks like we need a definition of "honest" to clear up the definition. Let's stick with definition 1, but clarify a little.

A Google search finds Oxford, who puts it this way: 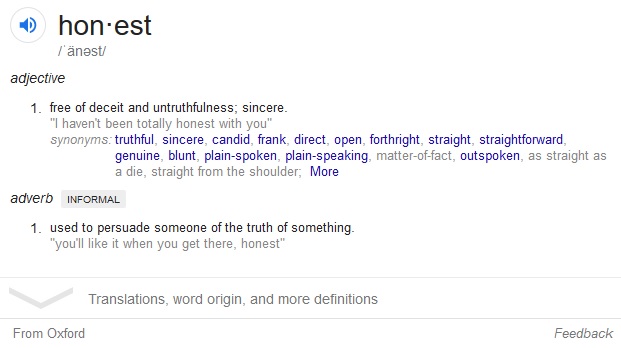 The site at Merriam-Webster adds a few more details, but they all point to the same place: 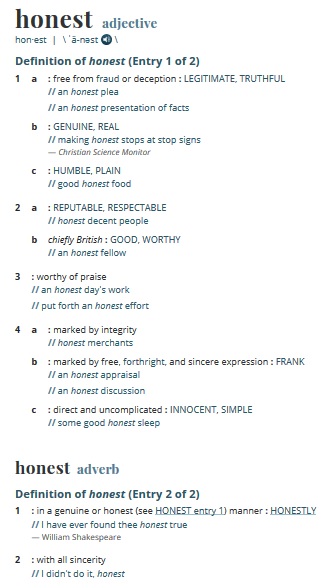 The truth is part of honesty

Notice anything that repeats in the two definitions of "honest" given? For both, some variation of the word "truth" is in there. If you are being honest with someone, you are telling them the truth.

What if you don't know that you are lying?

So, what does it mean that someone says that they are being honest with you, but tells you a lie without meaning to? Is he/she being honest with you? Hmmm. Of course, if you don't intend to deceive, then can you be called honest even if you told an untruth? But, wouldn't that then be an opinion, and not necessarily the truth? Unless you are asked what you think about something, being honest does not mean to give your opinion on a subject. By the clear definitions above, it means to tell the truth.

Now, let's go a step further and see what should happen if an honest person finds out that he or she is wrong on a subject. Most of us would revise our thinking and start answering with the truth instead of what we used to believe. Right? But then, what happens if a person recognizes that they are wrong, but sticks to the same answer that they know is an untruth?

This actually happened to me in a discussion with the senior pastor in the lobby of a well-known denomination's church. His response phrase was something like, "I know that it is wrong to teach people that, but that is the way my church believes, so I must teach it." Really, yes, this happened to me.

Now, that last statement was very honest - toward me. But, it was not being honest to his congregation when he continues to teach them something he knows is a lie. So, is this pastor an honest man? If you think this doesn't happen in real life, then you are not being honest with yourself, honest! (grin)

Not just the one time

In discussions with the pastors of a few churches, points have arisen demonstrating that their teachings do not match that of the Bible. In nearly every case, after discussing the issue, their teachings have not changed, even though they recognized the validity of the point. In one case, it was the Messianic-Jewish rabbi of a synagogue in our home town of Vancouver, Washington. When asked about Christmas, he said that he knew that it was a pagan holiday, but since it was an American tradition, he allowed it in his synagogue. Why would this happen?

Most often, the "honest" answer to that question is that the church or denomination's leaders have either softened God's commands regarding the issue, or have "redefined" the subject so that, for them, it no longer falls under the commandments.

Some admit to the actions, others just make things fit their views or needs

For the pastor above, as well as for John MacArthur (well-known preacher and radio show host), the issue was actually celebrating and using a known pagan holiday as a conduit for teaching non-believers about Christ. Since this is a blatant violation of multiple commands from God (Deuteronomy 12:3-4,30-31
3 Break down their altars, smash their sacred stones and burn their Asherah poles in the fire; cut down the idols of their gods and wipe out their names from those places. 4 You must not worship the LORD your God in their way. (Deut 12:3-4)

30 and after they have been destroyed before you, be careful not to be ensnared by inquiring about their gods, saying, "How do these nations serve their gods? We will do the same." 31 You must not worship the Lord your God in their way, because in worshiping their gods, they do all kinds of detestable things the Lord hates. They even burn their sons and daughters in the fire as sacrifices to their gods. (Deut 12:30-31)

, Deuteronomy 18:9
9 When you enter the land the LORD your God is giving you, do not learn to imitate the detestable ways of the nations there.

), which these pastors know quite well, they have to redefine either the command or the violation to make it "acceptable" to the people.

For the one pastor, he honestly confessed to knowingly violating God's will, taking the responsibility on his own shoulders.

As for MacArthur, not only does he use the paganism to teach people about Christ, he has redefined the keeping of the Sabbath as a ceremony rather than a commandment, thus removing it, for his own purposes, from the moral issue of breaking the Ten Commandments. (You can see examples of this in excerpts from his own books on the Integrity, Character and Truth War pages under the main menu title Character.) Please note that this only makes the issue of breaking the commandment more palatable to people, while it is still not acceptable to God. That, however, is never addressed in the teaching to the congregation. He evidently feels that he can "shed the responsibility" for the disobedience of the people by teaching that God's word means something entirely different than what it actually says.

Sometimes, comfort is the issue rather than obedience

In the case of the rabbi, it was the acceptance of a pagan holiday celebration (Christmas) because he recognized that this "holiday" is an American tradition, so he allows it in order to keep them from being uncomfortable (and perhaps leaving the synagogue). Yep, his own words. Now, this was a Messianic-Jewish rabbi who knows the necessity of not mixing paganism with Christianity, but he allowed it in his synagogue. That is called compromise with the world, and goes directly against Romans 12:2
2Do not conform to the pattern of this world, but be transformed by the renewing of your mind. Then you will be able to test and approve what God's will is - his good, pleasing and perfect will.

and James 4:4
4You adulterous people, don't you know that friendship with the world means enmity against God? Therefore, anyone who chooses to be a friend of the world becomes an enemy of God.

Doing something just because "everyone else is doing it", without making sure that it is within the will of God, is compromising with the world. Sure, we all do it, usually without even realizing it because it is such a "normal" part of our world around us. However, upon discovering that the word of God discourages it, we should think again, and then resolve to get it out of our lives. This assumes that we are studying the word of God well enough to discover what it encourages and what it discourages.

There is a special event, described by Jesus Himself, reserved for those who cause others to sin:

Believers can be misled

All Christians believe in Jesus, but not all know God's word well enough to avoid the pitfalls placed by most of the pastors out there. The pitfalls are not placed deliberately, but are there because of compromise with the world and temptations from Satan. Yeah, I know, this sounds like a kid's fairy tale with the big bad wolf, but why else would thousands of different denominations all claim to be the true church while every one of them do exactly what God says not to do - and encourage their congregations to follow?

Remember how the Lord taught us to pray, "...Thy will be done on earth...". For many of us, we should make sure we know how we fit into the will of God before we ask Him to make it happen. Regardless of how we feel or what we think, the Bible tells us that God's will is going to happen when His kingdom comes - not ours.